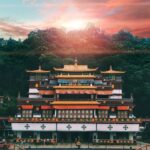 7 MINUTE READ The Himalayan state of Sikkim has influenced its neighborhood with its history, economy, society, resources, biodiversity, and serene views. It is also the second-smallest and least populous state in India.  The word “Sikkim” originated from the combination of two Limbu words: “su,” meaning “new,” and “khyim,” meaning “palace” or “house.” The Bhutias […]

Appreciate MY work by giving some amount

Theanamikapandey is an independent blog.
In this blog you can get information about a lot of topics.